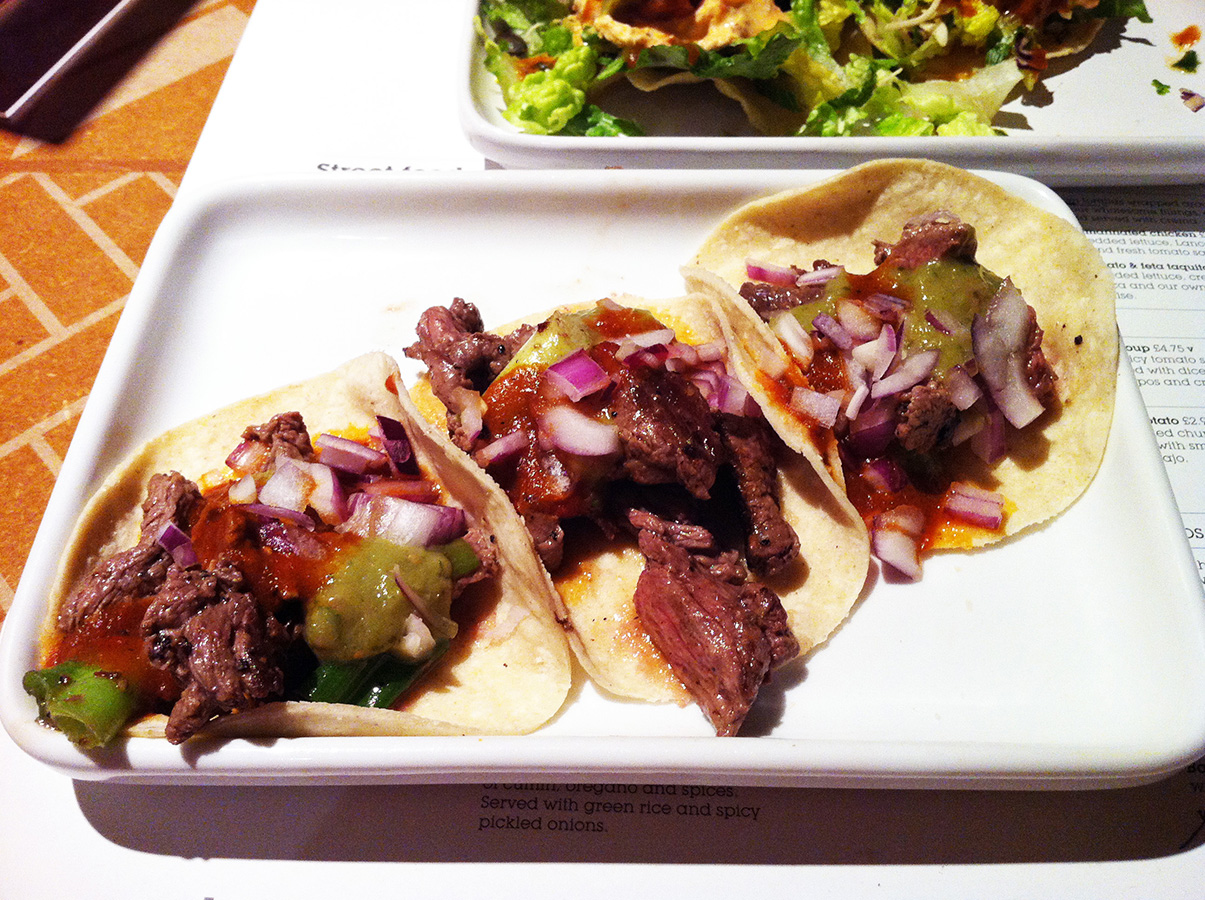 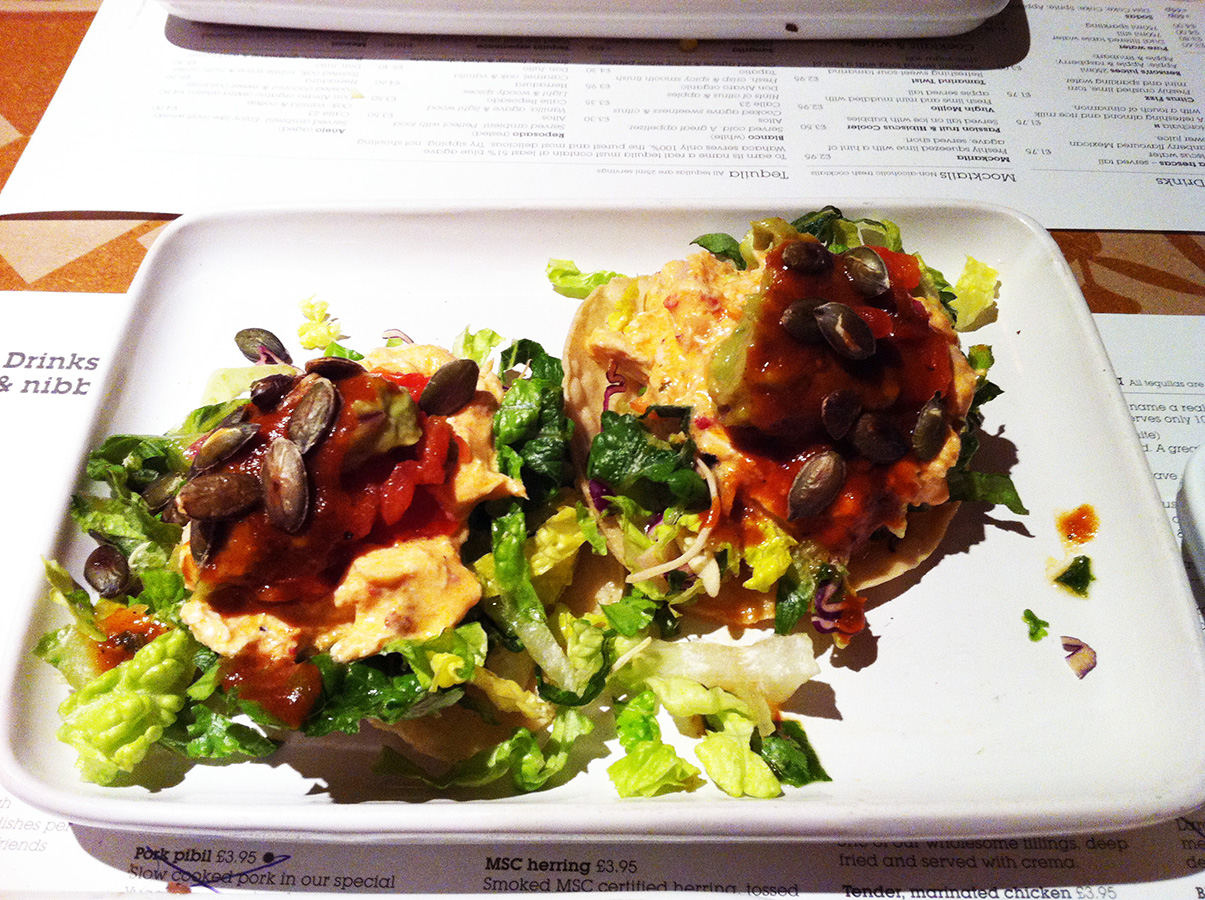 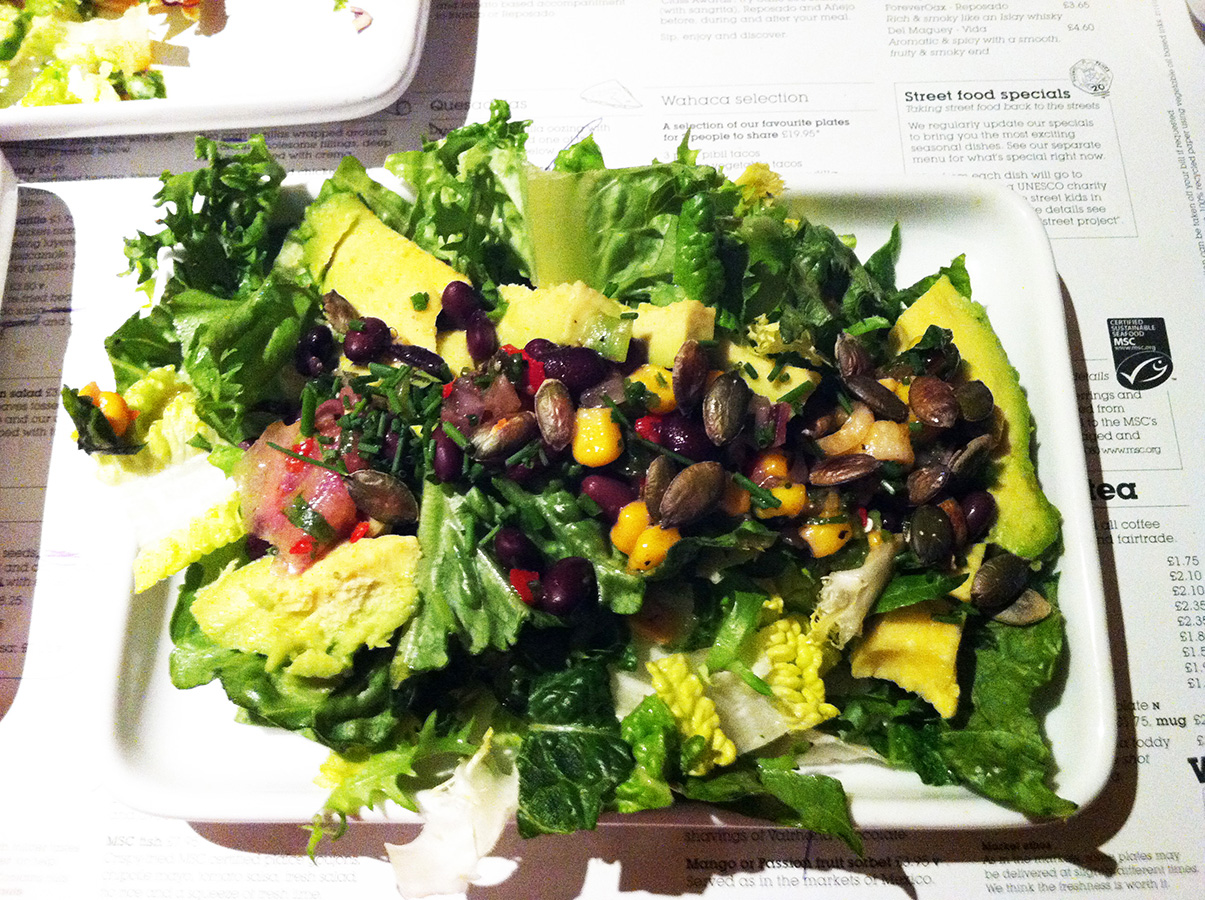 Recently Wahaca has been focusing on street food. The signs outside the restaurants shout it out, the menus are built around it, and they even bring you Street food specials (with 20p going towards street kids in Mexico City).

Street food is nothing new. The population of Asia, South America and the Middle East have all been eating food bought from stalls on the road or street for centuries. In fact, there’s even evidence of street food way back in Ancient Rome (because the urban poor didn’t have kitchens of their own). And in truth, we’ve been eating things like sandwiches and pasties in Britain for yonks, too. But street food is now officially designated a ‘hot trend’. And who best to fill us up with delectable dishes, singing with fiery flavours, than Wahaca?

For gluten-free and dairy-free folk, Wahaca is a good choice. I went to the restaurant on Charlotte Street and our waiter was brilliant – he consulted the crib sheet carefully and one by one, went through the menu ticking off what we could eat. He was reassuring and immensely helpful.

I went for the Chicken Guajillo Tostadas. Two crisp tortillas piled high with chunks of chicken marinated in a chipotle dressing, layered with crunchy salad mix, guacamole, salsa fresca and thier smoky guajillo oil. I’m typing this from the menu but it’s all true. The corn tortillas (and wow, it’s great to be able to eat a tortilla as even the corn ones usually have wheat in them) were crispy, and they were piled high with tender chicken and all the components of this great dish. The freshly-made guacamole was lovely, as was the chipotle dressing, salsa and guajillo oil. This is layers of flavours – all mouth-tingling and full-on. I ordered, too, the Grilled British Steak (yay, British!) Tacos. The menu tells me this is three soft corn tortillas with the steak and chipotle salsa. The steak was delicious – good beef, cooked well, and it was excellent as a follow-on from the chicken, especially because the tortillas were different, as they were soft this time. (And I’m loving the chipotle theme, by the way…) My final choice (as in most sharing dishes places three plates is definitely enough per person) wasn’t nearly as exciting, though. The Corn and Bean Salad had good ingredients (including pumpkin seeds) but the sum, unfortunately, wasn’t as good as the parts.

But I’ll come back – and very soon, too. There’s the Green Rice (blitzed with coriander, onion and garlic), the Spicy Slaw (with a chipotle dressing) and the Fish a la Pimienta (an onion, black pepper, lime and pumpkin seed sauce) that I want to try. And next time, too, I want to make it upstairs to the very, very funky bar, and try some of the tequila (I’m thinking the Don Julio which tastes, apparently, smooth, honey and of dark chocolate.)