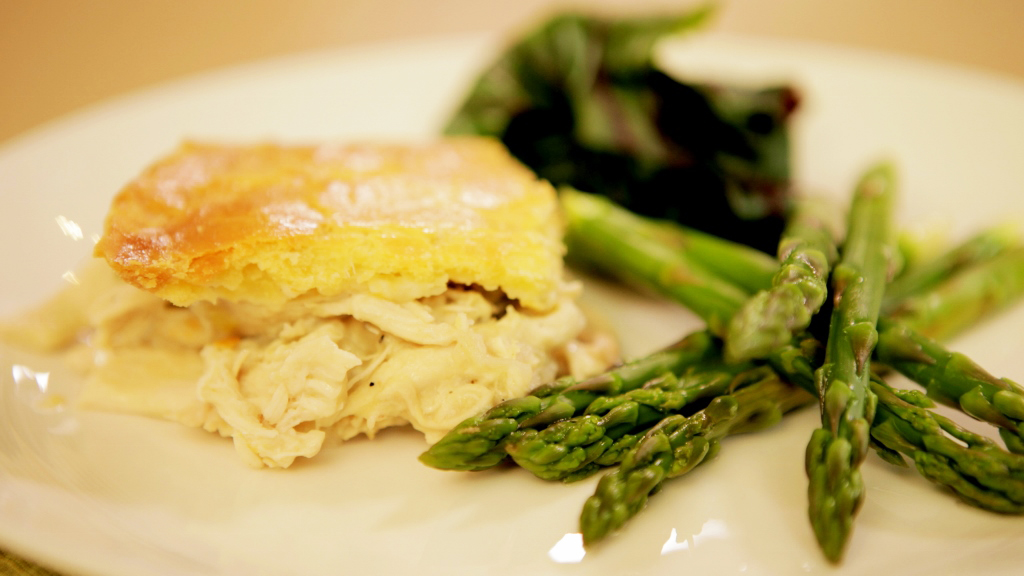 The Chicken & Tarragon Pie was the first recipe we shot during the day’s filming for Waitrose TV. It was the first time I’d done anything like this, and it was completely fascinating how the whole filming process rolled out.

Once I’d had my hair and make-up done (very nicely!), I went through the order of filming with the home economist. The recipe was divided into 3 blocks of filming – for making the gluten-free pastry, making the white wine sauce and the filling, and for rolling out the pastry and putting it on top of the pie – and we went through the running order together. I’d expected lots of takes during the filming but, in fact, once we started the filming, we only did one take on each. But what we did do, though, was to do additional filming of close-ups on my hands as I was doing various parts of the recipe. And later on, I did an additional voice-over of the recipe methods. 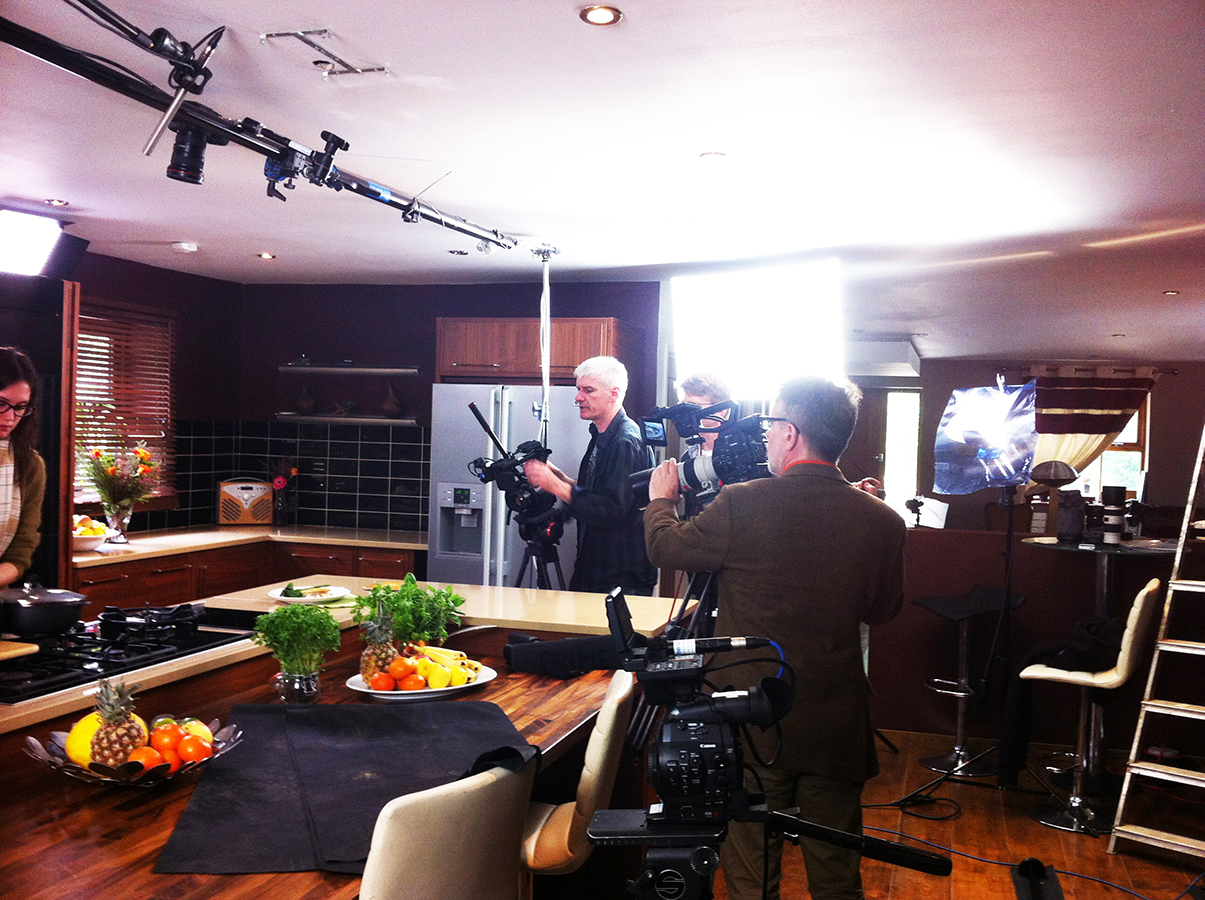 Gluten-free pastry is MUCH easier than people think. The only thing to focus on is that you need more liquid than wheatflour pastry. This invariably makes your pastry sticky. But instead of using loads of flour when you’re rolling the pastry out so that it’s not sticking, the best thing to do is to work with the dough in its sticky state. Sometimes I roll pastry out on a breadboard so that I can then use the board to turn the pastry onto the tin or dish. But the best trick I’ve found is to use baking parchment when you roll. This enables you to roll out the dough without it sticking to your rolling pin – and then you can use the parchment to turn the pastry onto your dish. Generally I start rolling it out on one piece of parchment and then, when it’s getting too sticky, I add another piece of parchment on top to finish the rolling.

When you’re making a dairy-free sauce, it’s really easy to get something that tastes utterly delicious. The world of dairy-free milks and creams has completely opened out in the last couple of years and there are now lovely products on the market. I love the different fresh nut milks – especially the coconut milk – now available. And also the fresh soya creams that you find in the chiller cabinets in supermarkets. I tend to use either a milk or cream and then add some stock, too. And in this case, I’ve added white wine, too, to make a dairy-free white wine sauce. 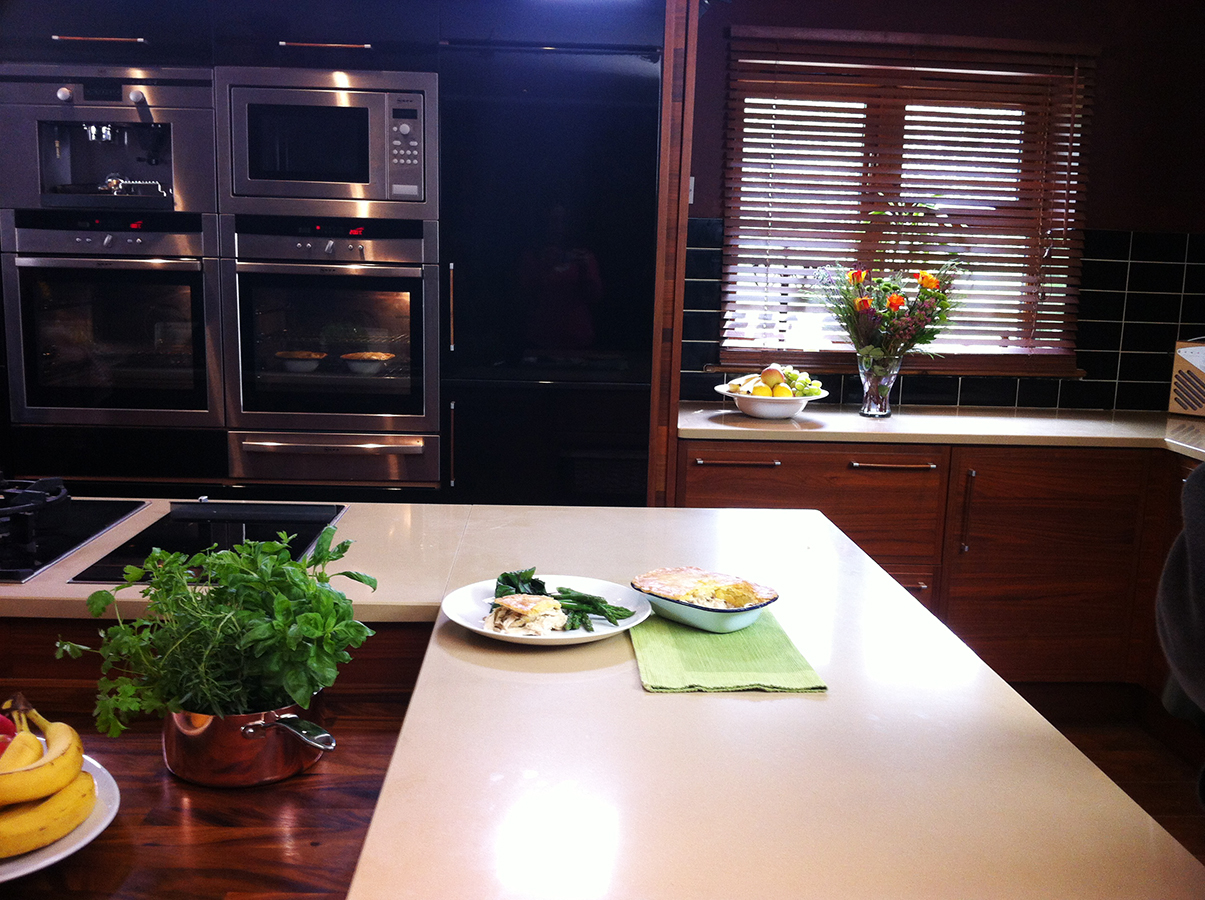 I wanted to make a really simple pie recipe for this. So I’ve used just onion, garlic, chicken and tarragon – but this combination creates a pie with wonderful flavours. The tarragon imparts an aniseed/licorice flavour with undertones of vanilla and pepper – all of which go wonderfully well with chicken. And when the filling is baked as a pie, it makes a wholesome yet light and fresh-tasting meal.

If you click on this link, Gluten-Free & Dairy-Free Chicken & Tarragon Pie, you’ll go to the film!